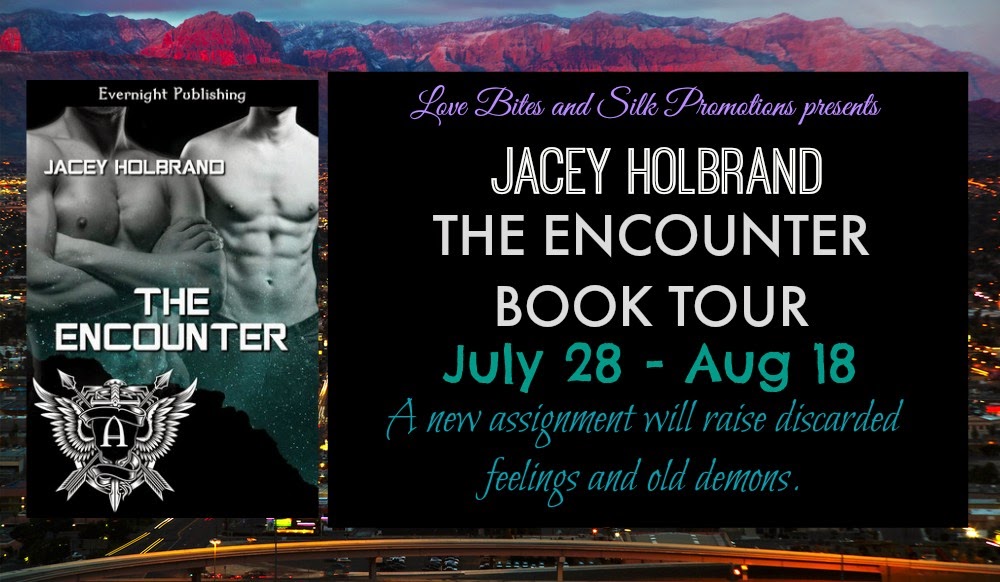 The Encounter by Jacey Holbrand
Blurb:
The Agency ~ 1
Evan ‘Zen’ Zenas is the top agent at The Agency and is known for his brusque demeanor. He’s also known to be tough on trainees. Those who find themselves under his tutelage usually don’t last long. When he’s assigned a new assistant, Seth Trivos, Zen’s faced with questions about his past he’s not too keen on answering.
Seth Trivos knew Evan once upon a time, loved him even, but when Evan disappeared, he unknowingly broke Seth’s heart. Now, he’s in Evan’s world as the newest recruit at The Agency, and he’s looking for answers.
Will Zen chase away another new assistant because he doesn’t want to open up about a past encounter or will being forced on a case together make him face the demons he’s been trying to hide from?
Be Warned: m/m sex 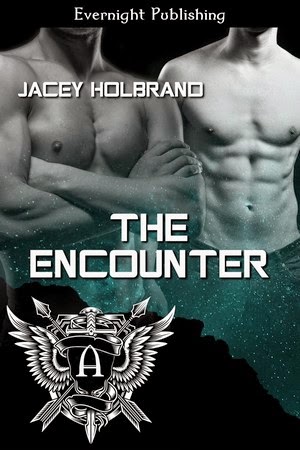 Zen rolled his eyes at Chief’s voice booming through the phone intercom and pushed away from his desk. Leaving the comfort of his corner office, he ignored the “ooos” of his fellow coworkers scattered throughout the low-wall partitioned cube farm. He jokingly gave them the middle finger as he turned toward his boss’s office.

Owen “Chief” Krantz, owner of The Agency, wanted to see him, and it wasn’t because he was in trouble, as those around him would like to believe. A new protégé was in his future—if his earlier glimpse of the young pup coming to report for his first day of work was any indication.

Another rookie. The Chief loved to give him “the fresh fish.” He said if the trainees could survive him and his attitude, they could survive anything. He couldn’t argue. The work he did for The Agency was serious, and he expected others to take it the same way. Unfortunately, a good portion of the new employees who came in didn’t. They treated what went on with the cases as a novelty.

Stupid reality shows, making the search for the paranormal, supernatural, and alien existence seem like easy fun. Real people had real issues. They needed to be treated with respect.

Luckily, he did have a way of reading people and cutting through the bullshit, and most people couldn’t handle his frankness. It’s the reason why his boss gave him the newbies. He weeded out the nonserious adventure-seekers. All three “fish” he had in the past year and a half left The Agency and went on to other careers. When the third left, the guy said he was going to go work in his brother’s kennel—the bitches there would be nicer to him.

So be it. Zen liked working alone.

Chief’s office door stood open an inch. Before entering, he decided to take a moment to assess the situation. Always good to get the lay of the land before stepping into something new. Peering in, he fixed his gaze on the recent hire standing opposite Owen, who was sitting at his desk, and purposely eavesdropped on the conversation.

The new guy was already nitpicking his role at The Agency. His main beef: working with Zen on assignments.


Jacey Holbrand believes love comes in all forms and should be celebrated. She’s committed to her muse and writing so she can share those kinds of stories with readers. Hot days. Sexy nights. Come play in her world. Jacey loves to hear from readers! Click the link to eMail her: JaceyHolbrand@gmail.com