Blog Tour - The Ties That Bind by Christina Mandara 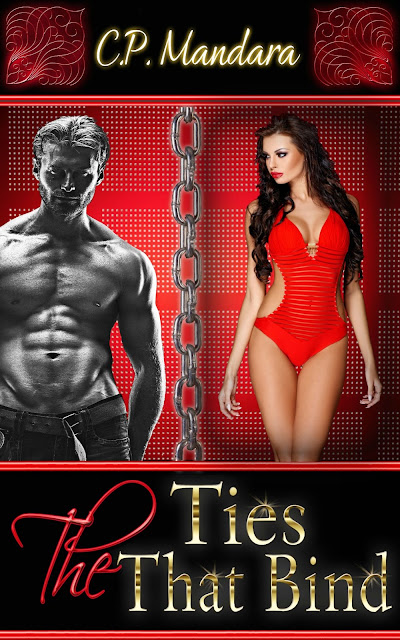 Will Mark Matthews accept Redcliff’s terms for his daughter’s release, surrendering both body and mind to the enemy? Petal’s sanity depends upon the fact, for in the sixth and final book of Pony Tales she is to discover that the fate in store for her at Albrecht is not a pretty one.

Trouble awaits when she returns to the stables, however. One of the trainers has taken a monstrous dislike to her and intends to prove his superiority, both in the dungeon and beyond. 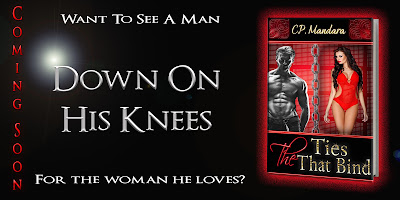 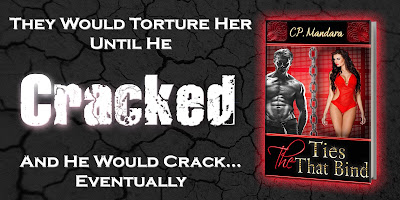 PG EXCERPT
“She’s been screaming her head off for an hour, Michael. Can I knock her out, or at the least move the woman somewhere far, far away, preferably underground?”
There was a long sigh at the end of the telephone receiver and it was clear that the owner of the voice was in a testy mood.
“K, darling. It’s unlike you to be so squeamish. What’s up?”
The blonde on the other end of the receiver sighed again. Michael’s voice was not one of sympathy and it was clear that her sentry duty was far from over. “Your son is putting muddy footprints all over my brand new, silver travertine tiles. He’s already necked most of the alcohol in the house and has now taken my remote control prisoner.” She added a little growl for effect, to let him know she was not at all pleased by the turn of events.
There was a slight pause as her complaints were considered before all of them were rebuffed as she had expected.
“You have a cleaning lady who will be in first thing tomorrow to clear up the footprints and any other mess he might leave, paid for by me I might add, and I’m more than happy to get you a delivery of whatever tipple might take your fancy. Of course, you realise you can’t drink anything with her in the house and nor can you watch TV, so I fail to see your point.” The voice had taken on a bemused tone. “It’s the screaming that’s getting you down, hmm? And here I thought you enjoyed that sort of thing.”
The blonde heard a burst of uncharacteristic laughter erupt from her handset and nearly fell over from her position, leant casually against the granite kitchen countertop. As it was, several cookbooks fell to their demise and a jar of chrome utensils quickly followed suit.
“K, dear, are you OK? It’s nearly all over now. We’ll have him right where we want him in just a couple of days. The girls are in place, and there’s the added bonus of having both Isabelle and Jennifer as an incentive to get Mark to co-operate. I think the man has a conscience, but we’ll find out shortly, darling.”
“What are you planning to do with them?” Scuttling around on the floor, she banged shiny serving spoons, spatulas and ladles back into their container, loud enough to create pretty impressive backing for a drum and bass album.
“Something diabolically nasty, what else? I want to watch him squirm and I want him to know exactly what I’m capable of. When you take on someone of Matthews’ calibre, you make sure he understands you the first time, because there’s no way you’ll get hold of him a second time.”
The banging stopped abruptly and a smile flittered across K’s face, her bright red lips uplifting in sudden comprehension. “Oh goody, we get to play with them, too?”
Michael Redcliff cleared his throat and smiled to himself. “Yes, dear, that was the plan. Have you cheered up a bit now?”
“A little,” she admitted, her voice having taken on a soft, dreamy quality and her thoughts were suddenly whisked to far more pleasurable pastures.
“Good.”
“But what about the damn screaming,” she groaned, coming back to earth firmly with a bump.
“Do you have your cell phone handy?”
K finally managed to get herself upright and set the utensil jar safely back on the counter. She pulled the receiver away from her ear and looked at the phone as if it had sprouted purple fur and claws. Rolling her eyes, already wondering where this was leading, she put the handset back to her ear. “Of course I have a cell phone, but I’m on the home phone at the moment. You want me to call you from my cell?”
“No darling. I want you to record the delightful Isabelle’s screams. A little bit of sobbing and begging wouldn’t go amiss, either. Let’s stir Matthew’s up and get him a little jumpy. Make the recording around a couple of minutes in length and then send it to me. I’ll need to deliver it from an untraceable account. We don’t want to give the boy any ammunition he can use.”
“OK, give me ten minutes and I’ll get it to you. Out of curiosity, though, why aren’t you keeping her at yours?”
“Ahh, that’s because there’s always the chance that Matthew’s may be really stupid and have the authorities come barging in here. I’m the only link he has. He doesn’t know that you’re my sidekick. You won’t even be up for consideration. He gets very protective of his staff, I hear, and has gone to some great lengths to ‘save’ them in the past. It helps that he’s got a soft spot for Isabelle and a hard one for my daughter.”
“But Isabelle isn’t one of his girls, is she?”
“She is now.”

Christina Mandara was born in the UK, but has spent most of her life travelling the world. She speaks three languages and has been chiefly employed in the fields of finance and travel. Her favourite city is Sydney and her favourite holiday destination is the south of France.

In her spare time she's usually cuddled up with a good book, exploring the countryside, or baking in the kitchen. In fact, she loves her kitchen so much, she's one of the few woman who wouldn't mind being tied to it! Her first and foremost love is writing, however, and more often than not you'll find her on a laptop spinning tales of romance, erotica or dark, paranormal fantasies.

Christina is generously running a giveaway during The Ties That Bind book tour and giving away the following:
First Prize: $10 Amazon Gift Card
Second Prize: A signed copy of 'The Riding School,' with signed bookmark
Third prize: A black flogger and fridge magnets