Showcase: A Twist of Fate by Summerita Rhayne

A Twist of Fate by Summerita Rhayne

The King And The Courtesan 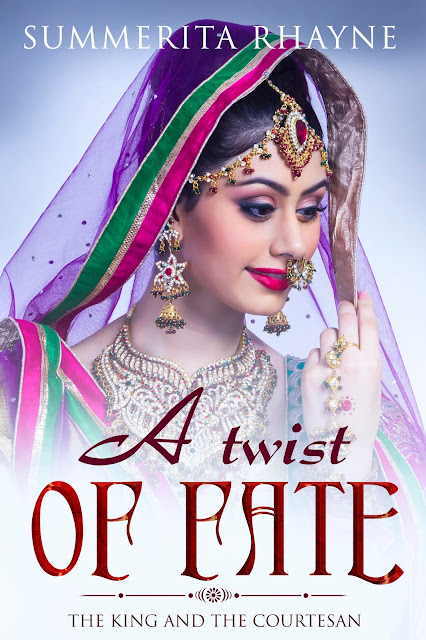 "I want to find him. And when I find him, I will destroy him."
Charulata wants revenge. She seeks to spill the blood of the man who ruined her. He married her and left her after one night. The diktats of her society declare only one place suitable for the woman rejected and deserted by her husband – the abode of the concubines. Charulata faces ruin and now lives and breathes for one purpose...the only purpose keeping her alive. How to track Deva – and kill him.
Deva knows he had earned the wrath of this woman. Embittered and devastated, he's a wounded lion hunting his enemies. Regrets and softer feelings are long gone from his life. He encounters Charulata with all the arrogance of his forebears. Yet the fire of hate is mixed with the fire of attraction between them. Rage and passion have become inseparable...

A Twist of Fate follows the entwining fortunes of Charu and Deva in the post Vedic ancient India. Greed, treachery, and deception feature highly in this story of royal suspense. Can love have a hope of surviving amid such intrigues?

To be a courtesan in ancient India was a fate far worse than slavery. This is the second book written on the theme by the author. Also read Against The Tide, the story of the royal concubine, the first book with the same theme.

Summerita Rhayne writes contemporary and historical romance with lots of emotional conflict. She first got published in 2013 and has won contests with prestigious publishers such as Harlequin and Harper Collins India. Her pet belief is, if the inspiration is strong enough, the story characters will find a way to make the writer pen them down, even when writing time is in short supply. When cerebrally confronted with the sizzling interaction of two Alpha characters, the only way to get peace is write their book!

At heart, she's a family person and even though she loves her teaching profession, she happily becomes a homemaker when not at work. She loves winding down with music, romcoms, cricket (strictly watching only) and social networking.

Her curved brows arched a little more – the mobile movement betokening the agility of a dancer’s expression. 'Mayhap the tall form of my cousin pleases you better than a moderately built one like mine.' At this, her eyes brimmed with humor before her lashes became cast down to hide it.
He resisted the urge to go over to her and tip up that firm looking chin. 'I can't tell what pleases me until I've held the form in my arms.'
He'd succeeded in having her gaze back to him, tangling with his and now her mouth curved in enjoyment of the sparing.
She said in a low well-modulated voice. 'You certainly have your ideas clear in your head, swami.'
He made a gesture of half of impatience and half dismissal. 'Don't call me your master. It's a slave more likely.' His mouth twisted at the admission. The clink of ornaments sounded and Charulata came closer to him. Her hands were held in front of her, fingers tightly interlocked. He reached out and pried them loose, clasping each. They trembled in each of his like trapped birds. Their gazes locked. His pulse increased its pace. He thought his insides trembled also and couldn't reason why.
'Do you really wish me to be so brazen as to step in your embrace?'
He gazed down into her eyes, conscious again of that mixture of humor and the shyness of a bride. He surely didn't wish her to come any closer. His blood pressure might not sustain it.
In direct contradiction, he said, 'Do you want to?'
Her eyes widened a little, but he had to acknowledge she didn't lack for comprehension. Two slim arms like the snakes of temptation wreathed round his neck and her warm curves pressed against his – what now seemed to have been destitute - body.
He felt definitely a tremor run through him. Instinctively, his hands reached out resting at the niche of her curving waist... She fit against him perfectly. His arms must have been made to hold her, her body to mold against his. His mind jumped to hope, to curiosity, the insistence how perfect would be the ultimate union with her –
Conscious of two impulses drawing him equally strongly in opposite directions, he tried to clear his mind. The urge to flee, to put distance between them, to remember why he was here – a lowly deception that clawed at him – was tossed against the second, as powerful wish – to take her to the folds of the silken sheets of the rose-petal strewn marriage bed.