Book Review: The Wrath of the Hellfires by Shatrujeet Nath

Title: The Wrath of the Hellfires 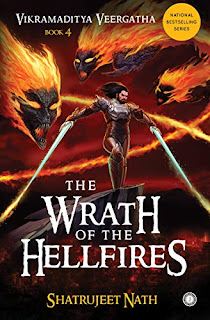 An impressive series closer! There, I’ve just summarised Shatrujeet Nath’s “The Wrath of the Hellfires” in a nutshell. But this one-liner will not do justice to such an elaborate and fascinating saga and that’s why let’s delve into the full review that this book deserves.

This final instalment of the Vikramaditya Veergatha series starts where the earlier left off. Vikramaditya is under attack from all ends and his council of nine is no longer the strong team that it once was, courtesy Shukracharya’s scheming.

With the Asuras and the Devas preparing to mount their final assault, Vikramaditya needs his trusted council backing him up. However, Ghatakapara is missing, Kalidasa has left Avanti to join the Hunas, and Vararuchi is laying his claim to the throne. Alone and abandoned by those dear to him, Vikramaditya is overwhelmed from all quarters.

Will the strife between the humans prove to be their downfall ultimately? Will Vikramaditya be able to fend off the Devas and the Asuras for good or will everything come crumbling down as the Devas and the Asuras leave the human world desolate in their quest for Veeshada’s dagger that seals within its hilt the potent halahal? Read this final chapter to find the answers yourselves.

Shatrujeet’s writing is like gold that keeps on shining. His characters have a life of their own and nowhere do they feel one-dimensional. His vivid imagery transports readers to the described setting. This book has heart-stopping action and intrigue from cover to cover. A must read definitely. 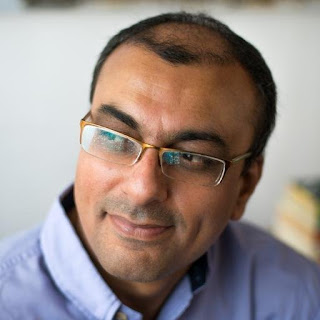 Shatrujeet Nath is the creator of the runaway national bestseller series Vikramaditya Veergatha, a four-book mytho-fantasy arc which comprises The Guardians of the Halahala, The Conspiracy at Meru, The Vengeance of Indra and The Wrath of the Hellfires. Described as “a new face to Indian mythology” by DNA, Shatrujeet writes for movies and web shows as well. He is also the author of The Karachi Deception, an Indo-Pak spy thriller.

Amazon
I'd like to thank the author for letting me review the book. I do hope you end up liking the book when you read it. Thank you so much for stopping by, and happy reading!

* I received a review copy from the author in exchange for an honest review.
** Picture courtesy: Amazon.in, Google