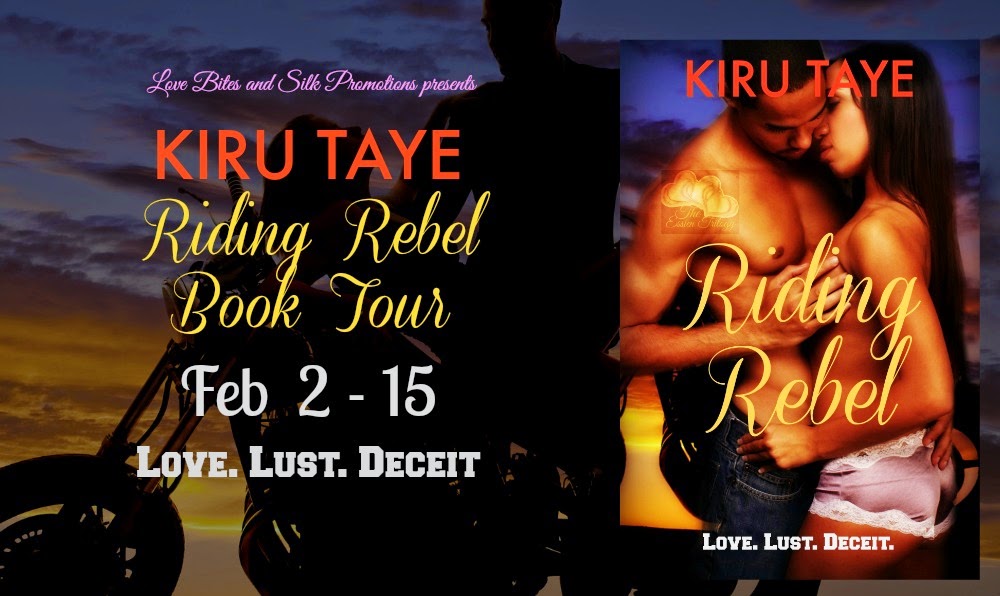 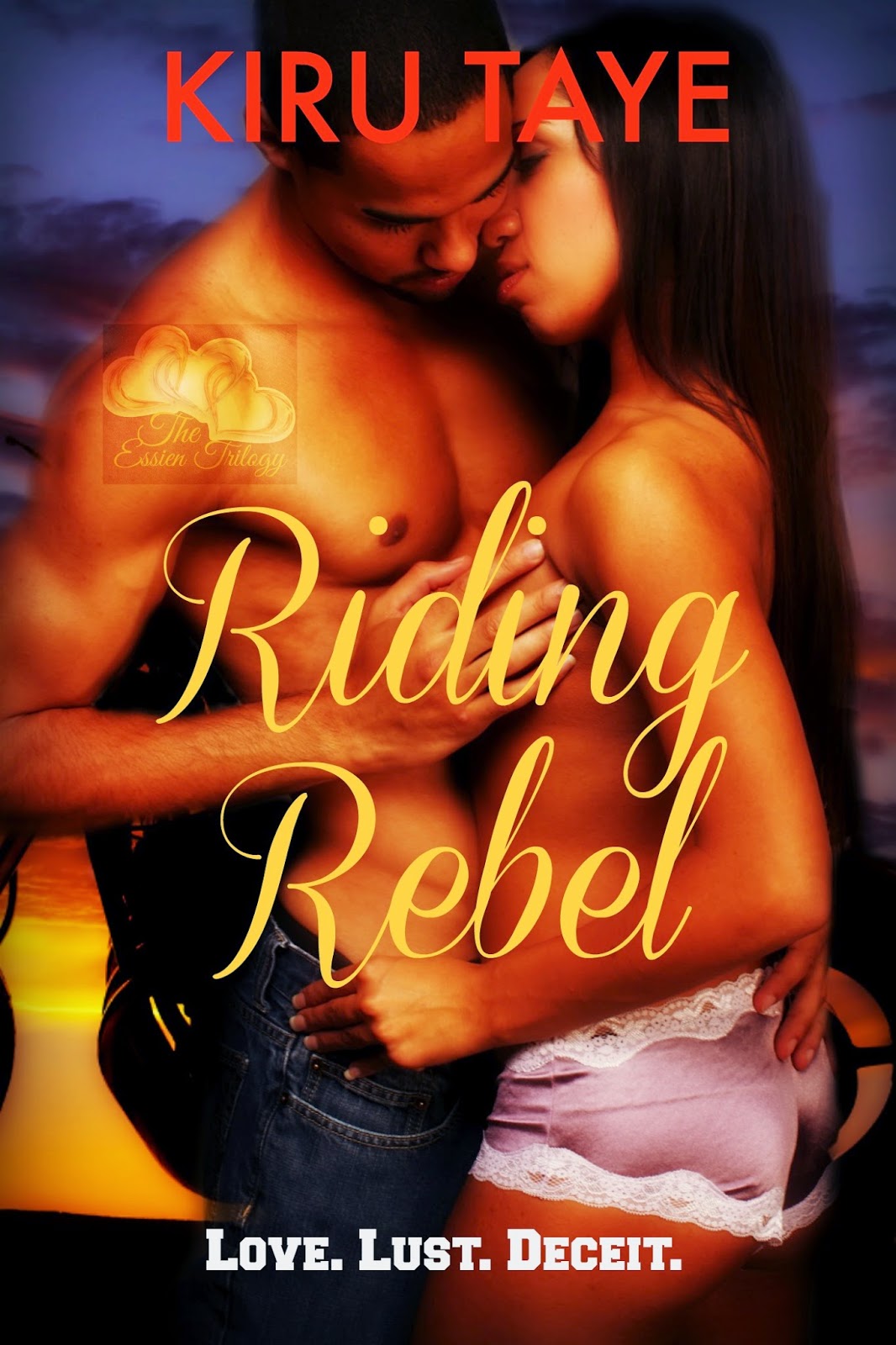 BLURB
Seen as the rebel Essien, Tony has always felt like an outsider. With a daredevil lifestyle, he’s more at home in leathers than in a suit, and more likely to be seen gracing the red carpets at a movie premiere with a starlet draped on his arms than in a boardroom. Still, he’s determined to prove himself to his family and build a successful movie business. Spotting Rita Dike at an event, he sees the potential star of his new movie and his next pleasure conquest.
Rita is a journalist looking for her big break. When she inherits the journal of her late best friend who claims Tony is not an Essien, she spots the perfect scoop. Her acting classes come in handy when she has to pose as an actress to get closer to Tony. Succumbing to the charms of dark and brooding Tony might just be the only way to get through the close ranks of the Essien family.
But as she gets closer to the truth, Rita risks losing the riding rebel who’s raided her heart. Can love heal hearts or will deceit break them?
Tagline: Love. Lust. Deceit
BUY LINKS
Amazon: http://www.amazon.com/dp/B00SJ16QDW/hubp0a34-20
Amazon UK: http://www.amazon.co.uk/dp/B00SJ16QDW/hubp0a34-20
Barnes & Noble: http://www.barnesandnoble.com/w/riding-rebel-kiru-taye/1121100886?ean=2940046525588
iBooks: https://itunes.apple.com/us/book/riding-rebel-essien-trilogy/id961035636?mt=11
All Romance: https://www.allromanceebooks.com/product-ridingrebel-1732740-178.html
Smashwords: https://www.smashwords.com/books/view/512264
Paperback: http://www.amazon.com/Riding-Rebel-Essien-Trilogy-Volume/dp/1505822122/ref=tmm_pap_title_0
Paperback UK: http://www.amazon.co.uk/Riding-Rebel-Volume-Essien-Trilogy/dp/1505822122/ref=tmm_pap_title_0

EXCERPT
His grip on her arm tightened and he increased his pace as they headed across the polished marbled floor of the lobby to the lifts. She stumbled. He swivelled, grasped her shoulder, and pulled her into him to save her from falling over. He'd forgotten she was tottering on sky-high-heeled shoes. He really shouldn’t be such a bastard no matter how pissed off he was at the situation.
His panting breath mingled with hers, their faces only an inch apart. "I'm sorry."
"It's okay," she whispered in a breathy voice, surprisingly subdued.
The urge to kiss her rose, watering his mouth. They stood in the middle of a busy lobby with prying eyes and mobile phone cameras. Tomorrow, their pictures would be splashed all over the Internet. It never bothered him when that happened. However Rita's artless demeanour indicated she wasn't used to the limelight. Something in him wanted to shield her from the exposure.
So he tamped down his desire and tilted her head up so she had to look into his eyes. Her soft, smooth skin felt warm and beautiful brown irises met his hesitantly. "I'm going to call the lift and go up to my room. It's your choice if you want to come up or not."
"What..." She sucked in a breath as if gathering strength to say what she needed. "What do you want from me?"
"I want to fuck you," he said in low voice meant for her ears only.
Her lips parted, her breath hitched. The pulse on her neck thundered and her throat rippled as she swallowed. But she didn't back away and her saucer-wide eyes turned molten brown with lust.
There. He had his answer. She wanted him. Would she let him fuck her? Because that's what it would be. In his world, sex was about fucking. Wild, animalistic, unrestrained rutting. He would see to her pleasure again and again. Still, it wouldn’t be sweet and it wouldn’t be loving.
A lift opened and a man stepped out. Tony released her and walked into the lift.
Turning, he faced her. Enough game playing. She had to come to him of her own volition.
She stood there looking sexy as sin as she bit her bottom lip and her forehead puckered in a frown as if she wondered why he'd left her in the lobby.
"I'm not going to drag you into the lift, if that’s what you were expecting." His fingers itched to do it, though. He didn't want to contemplate that she would turn around and walk away. Yet he had to give her the opportunity. "You have to walk into this lift yourself if you want me."
She glanced behind her and took a hesitant step backward.
His heart thundered. She was going to run. He held his breath and counted to ten to stop from stepping out and grabbing her arm. Instead, he jammed his finger into the door hold button and waited. Seconds ticked by that felt like hours. Sweat beaded his forehead.
She looked up and met his gaze. "Can you make the pain go away?"
TEASERS 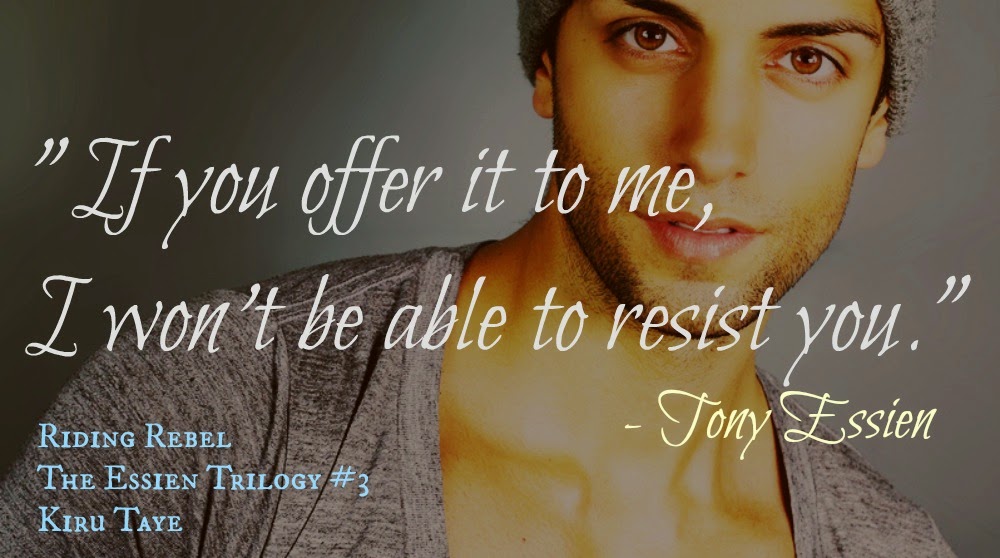 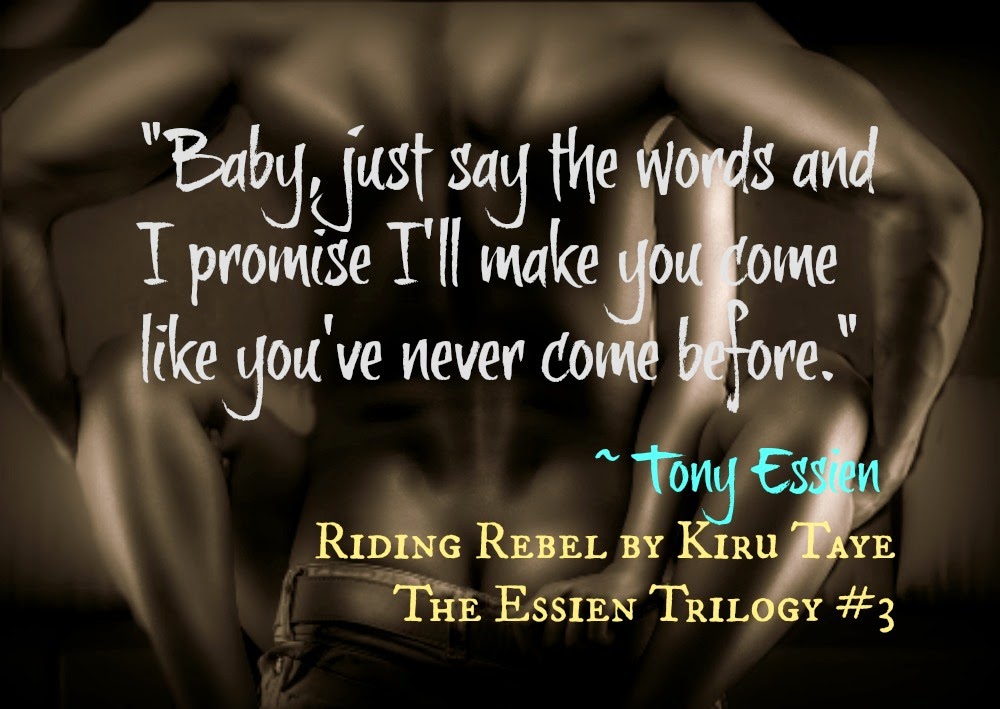 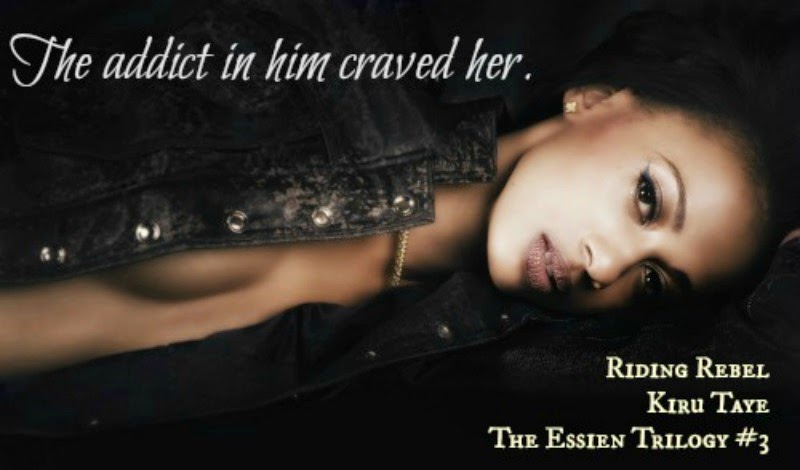 Top Ten Characters from The Essien Trilogy
Meet the Essiens
The Essiens are the kings of African finance. A close family, their father is the patriarch of a finance dynasty that ranges from retail to investment banking spanning the African continent. Yet all is not as it seems as the three brothers—Felix, Mark and Tony—soon discover when their family is rocked by secrets and scandals.
FELIX:The oldest son of Chief Aloysius Essien. His mother died when he was a boy. Crashes his Bugatti Veyron on his wedding night and ends up in a coma. When he wakes, he cannot remember his arranged marriage. (Keeping Secrets)
EBONY:Visiting Nigeria after a failed relationship and is persuaded by Felix to wed him on a special arrangement. When her husband wakes seemingly a different man to whom she married, she can't help wanting the new man. (Keeping Secrets)
MARK:Second son of Chief and half brother to Felix. Haunted by being the result of his mother, Angela's affair with a married man (Chief) and being born out of wedlock. So when his affair with Faith results in a pregnancy, his determined not to repeat his father's mistakes. (Making Scandal)
FAITH:Successful career woman. Member of her firm's executive board. Haunted by her non-existent relationship with her father. Last thing on her mind is making a family. Until Mark and his baby. J(Making Scandal)
TONY:Last son of Chief and Angela. Not involved in the Essien's finance empire. Movie producer. Rebel. Bad boy. Biker. When he sees Rita at a movie premiere after-party, he sees his next conquest. (Riding Rebel)
RITA:Recently lost her father and dealing with changes in family's circumstances. Jumps at the chance to get her big career break when her boss offers her a chance. But when she meets Tony, she realises she's in way over her head as Tony takes no prisoners. (Riding Rebel)
KOLA:Chief's adopted son and head of security for the Essien Empire. Ex-military. Solid and dependable. Features in all 3 Essien Trilogy books. Gets his own spin-off book later in 2015.
FREDDIE:Personal bodyguard and Tony's confidant. Tony sees him as much a brother as any of the Essien brothers. Get's his own spin-off book.
CHIEF:Aloysius Essien. Patriarch to the Essien finance empire and family. Married twice. First wife was Margaret (Felix's mother). Regrets his extramarital affair and subsequent death of first wife. Loves all his sons, including adoptive ones. Appears in all the books in the series.
ANGELA:Second wife to Chief and mother of Mark and Tony. Hung up on appearances and societal demands. While her sons indulge her sometimes, they have no problem shutting her down when she steps out of line. Feature in Making Scandal and Riding Rebel.
I can't talk about this series without mentioning the series villain.
PETERSEN:  Kris Petersen had a vendetta against the Essien family and features in all 3 books. He can be mean and manipulative and will stop at nothing to break up the Essien family and get his way. His comeuppance comes from a source he least expects.
CONNECT WITH KIRU ON SOCIAL MEDIA
Facebook: https://www.facebook.com/AuthorKiruTaye
Twitter: https://twitter.com/KiruTaye  or @KiruTaye
Pinterest: http://www.pinterest.com/kirutaye/
Google+: https://plus.google.com/+Kirutaye/posts
Goodreads: https://www.goodreads.com/author/show/5242699.Kiru_Taye
Blog: http://kirutayewrites.blogspot.co.uk/
Website: http://kirutaye.com/
GIVEAWAY
a Rafflecopter giveaway 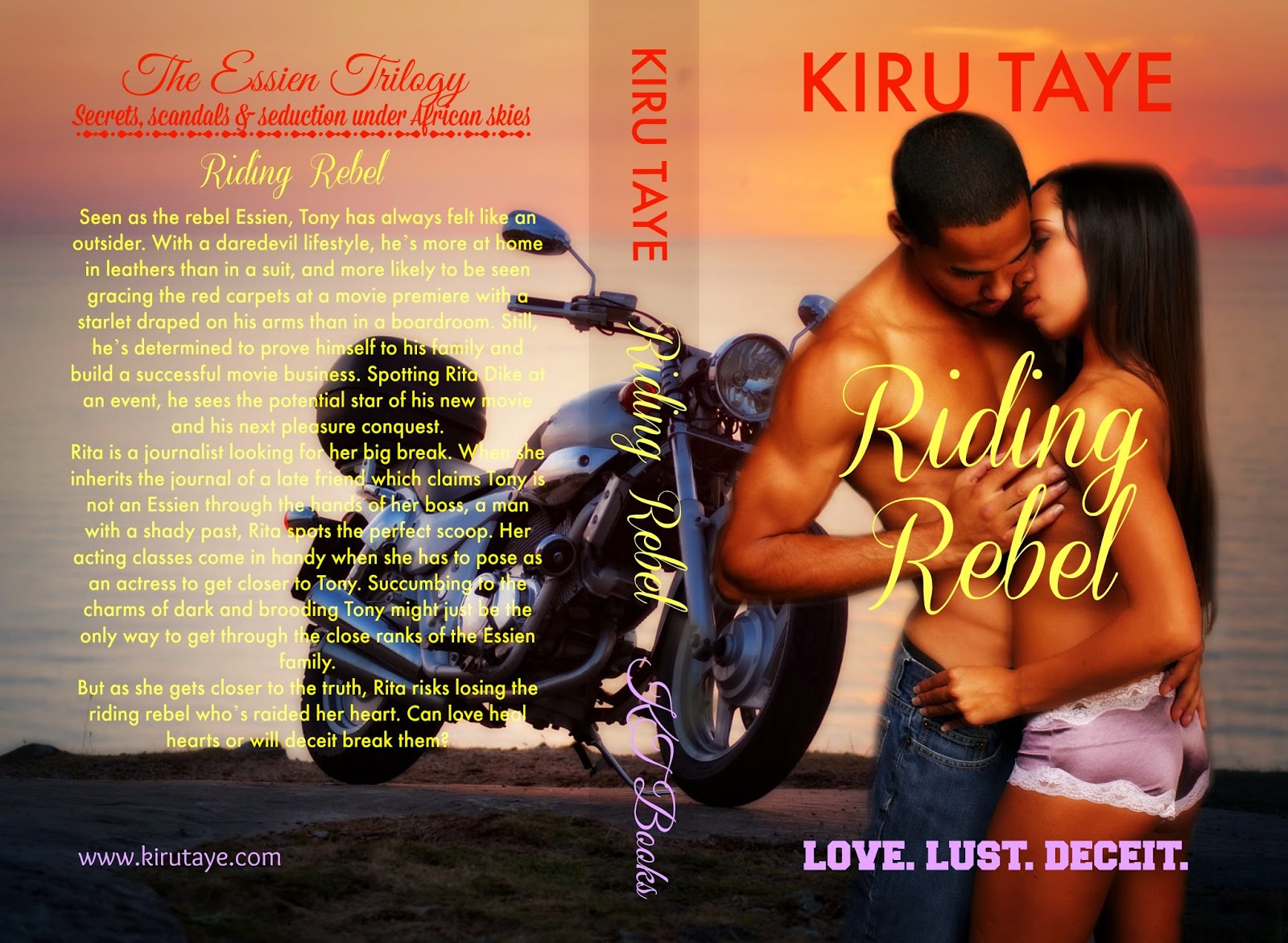