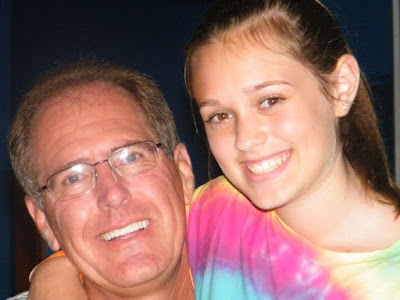 Mark was born number seven of eight children in a small town in Ohio. His family moved to Florida where he grew up, met an incredible women, got married and raised four fantastic children, three boys and a girl.

Many years later an empty nest left him to his true calling, storytelling. His first remarkable story is about a heroin whose courage and unrestrained personality, like his daughters, breathes passion and fervor into this adrenaline packed fantastical story.

When did you first realize that you wanted to be a writer/a storyteller?
Probably somewhere around the age of ten. I think that's when I was becoming self-aware. Before that I can only remember being in a shroud of fog, oblivious to my surroundings, not much was getting through my thick skull before that age.

What motivates you to write and where does your inspiration come from?
I don't seem to need motivating. I have the gift of gab so if I'm not talking I'm channeling my thoughts onto paper. My wife and family have heard most of my stories many many times, so who else can I tell them to, the rest of the world.

How did you come up with the idea for your current story?
One of my daughters-in-law is a librarian whom I love like my own daughter. So I thought I’d create a story about a library. The story actually started out as a mid-grade fantasy adventure about the internal battle waging between the electronic word of books and the written word within the library. But within a week or so it morphed and turned a whole different direction, not resembling anything of the sort.

What question do you wish that someone would ask about your book(s), but nobody has? Write it out here, and then answer it.
Will there be more of them? Of course I've roughed out a few more of the TwoSpells series already and have almost completed a mid-grade novelette tiled Corky which is also a series.

What is your writing process? Do you follow a regular routine or do you have any weird, funny, or unusual habits while writing and what are they?
I wake between 2:30 and 3;00 every day, my body clock was set many years ago. I exercise then begin writing while the house is quiet and peaceful. That last until I have to ready myself for work at 6:30. When I'm through work I begin again, usually around 3:30 to 4:00, after I ride my bicycle ten miles (I ride approximately 30-50 miles a week. But on my half day Saturday and off day Sunday I have a ton of time to write if I'm not playing golf.

Do you ever suffer from writer’s block? If so, what do you do about it?
Never. My worst fear though is that I'll not live long enough to write all the partially written stories I've concocted and are pinned up in my office or sitting in heaps, strewn about.

What are your current/future projects?
My awesome fantasy adventure children's story Corky which I wrote to entertain children the way these books entertained me; Charlotte's Web, Huckleberry Finn, The Hardy Boys and Nancy Drew mysteries, and Dr. Seuss. And of course the second in the TwoSpells series is in the works already.

Why did you choose to write in your particular field or genre? If you write more than one, how do you balance them?
I fortunately didn't choose it, it chose me. Besides the fantasy world is so much more exciting, there are absolutely no restrictions to hinder creativity.

Are you traditional or self-published, and what process did you go through to get your book published?
Self-published for a few reasons. Most of the successful work I've done in my lifetime was purely performance based. If it's meant to be it's up to me. That gives me full control of my own destiny. Fortunately my oldest son, my mentor and tutor understands the process and has guided me the entire way.

What opportunities have being an author presented you with and share those memories? (i.e. travel, friends, events, speaking, etc...)
The first and most important one is the ability to share my fantasies with the world, hoping they read it of course, and another is interviews like this where I can speak openly about myself and my thoughts.

What field or genre would you classify your book(s) and what attracted you to write in that field or genre?
Fantasy adventure. Like I stated before, there are no training wheels on my creative processes in a fantasy world.

What do you do if inspiration strikes in an inconvenient place like (car, restaurant, bathroom/shower, etc..) and how do you capture that moment before it gets away from you?
It doesn't usually because I carry a pen and notepad everywhere. My wife bought me an electronic voice activated recording device for Christmas a few years ago but I left it sitting on top the old VCR with the flashing time that I couldn't figure out how to set up either.

How do you think you have evolved as a person/author because of your writing and do you believe your writing has helped others, how/why?
This is my first written word; I'll need more time to figure that out. But I can only hope my stories bring a smile to their face, a slight gasp of oxygen and a mumbled, 'that was an outstanding story!'

Do you believe there is value in a review? Do you believe they are under rated, over rated, or don’t matter at all?
Perceived value is what my entire career was built on. I've been extremely successful at what I've done. Isn't that one of the great things that the internet has brought the world, the ability to see what the experts of any given field think or feel first before a commitment is made? I would always trust an expert reviewer more so than a layman who merely dabbles.

What is your biggest fear about having a book published?
The acronym fear means; False Expectations, Appearing, Real. I have no fear what so ever. Win, lose or draw my story was told.

Give us a fun fact about your book(s)?
The cover was masterfully created by a remarkable Ukrainian artist, whom before I wrote this book, I wouldn't have believed could be done by me, from this side of the world.

If you had the chance to get one message out there to reach readers all over the world, what would that message be?
If you'd like to read an action packed fantasy adventure with wonderful and creative characters that'll capture your affections, and is like no other novel before, then read TwoSpells.

What makes a good story, why?
A story folks will remember because it felt like they'd experienced the story with the characters themselves.

Do you read your reviews? Do you respond to them, good or bad? Do you have any advice on how to deal with the bad?
With seven billion people on this planet a whole bunch of them will hate my story potentially but a whole bunch more will love it. I'm certainly not going to be the answer for everyone's taste.

Were your characters based off real life people/events or did you make it all up?
Some of them were modeled after people I've met for sure. But aren't all experiences used in some fashion in our writing?

What is your most/least favorite part of the writing process, why?
Editing! Boring and tedious. I just want it done for folks to read.

Did any of your characters inherit some of your own quirks?
All of them did. I'm their only genetic parent. 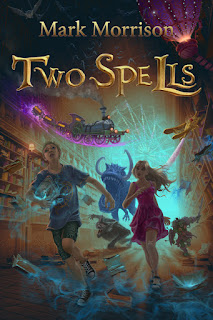 Sarah and her twin brother Jon are heirs to an ancient magical realm and its most valuable treasure, an enchanted library. The library endows readers with the supernatural means of crossing into the uncharted inner-sanctum of the second dimension, inhabited with peculiar and sometimes perilous creatures.

The children are emboldened with a wondrous mystical gift that no other being has ever possessed. But fate intervenes and triggers a disastrous inter-dimensional war that disrupts the fabric of time and space spanning multiple universes, tearing destiny a new and savage pathway.

The two must rescue their world from a phantom hybrid alien race controlled by a demented dark-wizard, Jeremy Sermack. They will either assimilate or be exterminated.

Will they be the saviors the prophets spoke of, or will they retreat to the perceived safety of their distant homeland?

Thank you for this amazing interview! I wish you success for all your future works. Keep writing!