Book Review: Who Owns That Song - The Battle for Subramania Bharati's Copyright by A.R. Venkatachalapathy 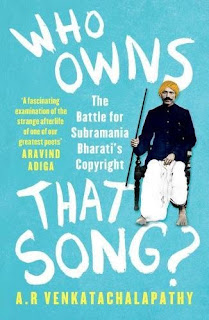 Not many know why there’s such a fuss about Subramania Bharati or his literary works. That he’s a gem of a poet is known only to a fraction of the Indian population. The reason is not exactly ignorance or lack of interest. It’s more to do with the fact that his genius remains untapped in the global language. An activist, journalist, and a freedom fighter, Bharati wrote in Tamil and only a fraction of his works has been translated. Some of these have failed to evoke the true essence of the magic that his own words spun in Tamil. Till date he remains an unsung poet whose work has been exploited and gathered momentum only at the face of a legal battle.

Born in Ettayapuram in 1882, Subramania Bharati was a social activist, journalist, and poet. He wrote thousands of verses throughout his lifetime on subjects as diverse as nationalism, the Tamil way of life, religion, children’s poems, and elegies to freedom fighters. However, he only attained fame posthumously when his half-brother, who held the copyright of his work, went on to publish the same. Others were profiting out of Bharati’s works even as his own family was in the doldrums. With filmmakers and publishers vying to acquire copyright to his works, legal battles for the rights were fought.

AR Venkatachallapathy’s ‘Who Owns That Song? — The Battle for Subramania Bharati’s Copyright’ is a story of the events that led to the nationalisation of the great poet’s work. In this book, Venkatachallapathy chronicles Bharati’s journey as an artist and how his works changed hands several times before finally being released by the government into the public domain, free of any copyright claim.

The way this book has been assembled is commendable. It is not Bharati’s biography even though it provides the readers with a glimpse into the author’s life. One can also get a sense of the narrow world of publication and of copyright laws of the past years. It is a valuable resource for those burning with the desire to understand the question – who does an artist belong to? This book raises the question of whether an individual's work should be dropped into the public domain for people to make use of as they wish instead of being passed down generations as family heirloom.

A skillfully written, well-researched account of one of our greatest poets and his posthumous fame. 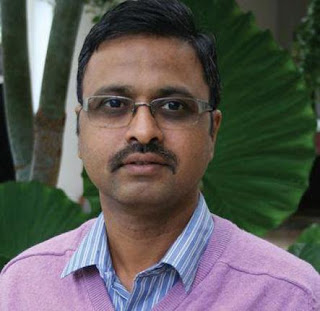 A.R. Venkatachalapathy, historian, writer and translator, is a professor at the Madras Institute of Development Studies, Chennai. He has taught at universities in Tirunelveli, Chennai, Singapore and Chicago, and published widely on the social, cultural and intellectual history of colonial Tamil Nadu.

* I received a review copy from the publisher in exchange for an honest review.
** Picture courtesy: Amazon.in, Goodreads.in