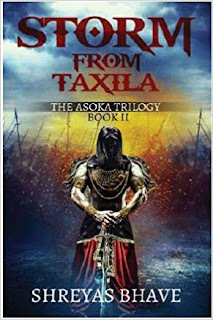 BHARATVARSHA, LAND OF THE ARYAS: 270 BC

Bindusar, theSamratChakravartin of all the Aryas, ruler of the Indian subcontinent, is dead. Chaos rules across the empire. The royal succession turns upon intrigue, dark coalitions, violence and death. The realm stands divided and civil war ensues.
In Vidishanagri: Asoka kills his brother’s Ashwamedha stallion and marches to Patliputra with his army. The ancient Brahminical order rises in his supports, awaiting his entry into the capital. Have they made the right choice?
In Taxila: The rightful heir, Sushem, raises an army to meet the challenge posed by his ambitious and gifted brother, Asoka. He prepares to march to the capital and seize the throne by force. Will history repeat itself; will Sushem achieve what his grandfather Chandragupta did 50 years ago?
In Junagarh: Guild Master Hardeo sets out on a private mission to acquire the great salt pans of Sindh. Will he succeed in his secret enterprise?
In Vidishanagri: Radhagupta travels to fulfill the task allotted to him by the Order.Kanakdatta, the Buddhist, stands up to stop him. Will Radhagupta fail in his mission?
The winds of war howl over the sub-continent, blowing every last person one way or the other. Blood will be spilled, secrets revealed and men ruined. History shall be made.
In Book II of the epic Asoka Trilogy, the storm approaches; the harbinger of death and destruction. When the dust finally settles, the great question will be answered: Who is the nextSamrat of the holy Lands of the Aryas? 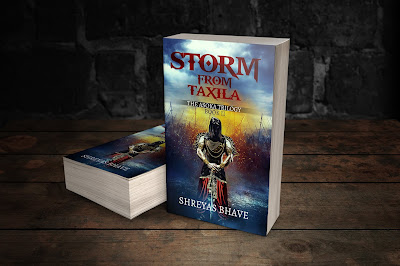 For many centuries the holy books of the Aryas have preached everything from eternal unity of one’s own kind to selfless service to one’s family and society. But aeons after they were written, we still cannot practice what we preach…
Our lands lie fragmented, divided by everything from regionalism to tribal sentiment and the petty selfishness of individual rulers. Our Rajas had fought over everything from women, to land and pride; so much so that wars with their neighbours has become a habit. And every time some powerful Arya rises above these squabbles and seeks to unify our lands, he turns out to be an evil monster rather than a rightful Samrat. Be it Jarasandha of yore or the tyrannicalNandas of our times, those who have tried to unify our lands have
It is not that the learned men of our society have accepted or become resigned to this state of affairs. They have always attempted to stand against these evil rulers. Beit Lord Krishna of a thousand years ago, or I the humbleservitorof my people in these unsettled times.
My name is Arya Chanakya, though I am known as Kautilya these days. Few are privy to my past so take heed of what I say; then hold the words sealed within your breast.
I was born eight decades ago in the northwest of our subcontinent, where the Land of theAryas ends and those of foreigners like the Mlechhas and the Yavanas begin. For my entire youth I strived for only two things - to accumulate knowledge of our world; and unite our race as a single entity.
People considered me foolish and stubborn. The Rajas laughed at my advice and continued to fight meaningless wars for worthless reasons. For three decades of my life my efforts were in vain as I tried and failed to instill the virtues of unity and service in our rulers.
Then, everything changed. I recognized my mistake. I had been counting on changing the mindset of our people from within. What I should have realized long before was that change of such proportions can only be brought about by a powerful external force.Fifty years ago, that powerful force arrived at the boundaries of our Bharat, armed with insurmountablepower. His name was Alexander, and he came from beyond the seven seas, from the lands of the Greeks. His objective was simple – to conquer the whole wide world. And our lands were next – the doorway to the far East.
The Rajas of the northwest reacted as I had expected. They made deals with this foreign foe in order to destroy the enemies of their own race. Even Raja Ambhi ofTaxila, did so. Only one man refused to succumb to Alexander. His name was Puru, the mightiest Raja of the region.
But evenPuru’s might was no match for Alexander’s tactics and deceit. On the banks of the holy Jhelum, everyone gasped with horror as Puru lost the battle to the Greeks – everyone except me; I just smiled.
As Alexander spent time consolidating power in the northwest, I travelled east to the greatest city of the known world – to Patliputra, ruled by the Nandas. My plan was simple: to ask the Nanda Maharaja to take his army northwest to defeat the Greeks. The people of the northwest were disgusted by the unmanly conduct of their Rajas, almost all of whom had surrendered without a fight. If The Nandas fought and won against the Greeks, the people of the northwest would accept them as their saviours, thereby uniting the subcontinent, north and south, east and west.
But my plan had a serious flaw. While everyone knew the Nandas had the largest standing army in the world, what few people beyond their borders knew was how they used it. I discovered that the army was used to terrorize their subjects. The Nandas were tyrannical kings who ruled with the force of an equally tyrannical army. I witnessed and experienced their tyranny first hand. I was imprisoned and tortured by Nanda lieutenants in Patliputra.
But I was rescued by an Ancient Brotherhood that had dwelled in the tunnels below the city for five centuries. Since its founder, Maharaja Ajatshatru, had laid down its mission, the brothers of the order had zealously safeguarded the interests of the Arya race, secretly. They rescued me from prison and inducted me into their ranks. They bestowed upon me their mission: To bring down the evil Nandas from their thrones. 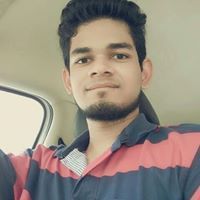 Shreyas is a 21 year old guy currently pursuing his B.Tech in Electrical Eng. from VNIT Nagpur. His love for history since his childhood prompted him to write his take on the story of Asoka who was one of the towering figures in the history of India, which has been taken up as ‘The Asoka Trilogy’ by Leadstart Publishing.

The first part of the trilogy called ‘The Prince of Patliputra’ has been published in January 2016 and garnered positive responses.

He is also presently working on several other manuscripts and completing the final year of his engineering Course.