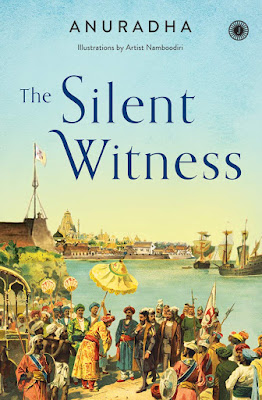 The Silent Witness by Anuradha is set among large events: the fight between the Sammudris of Kozhikode and the Rajas of Kochi and their combined fight against the ever growing power of the Portuguese. In this mix is thrown the threat from the Dutch, who wanted to establish their trade centre and control the spice market under the banner of the Dutch East Indi Company. They tried to seize the opportunity to topple the Portuguese rule by joining hands with Kerala Varma and Samoothiri.
Translated by Nirmala Aravind from the Malayalam novel ‘Kottakochiyum Kadalum Sakshi,’ this is a tale of loyalty, deceit, love, and war.

The author does an excellent job delineating in detail the struggle of the South Indian kingdoms to maintain its independence at the face of foreign invasion. It’s interesting to note how the search for the lands of spice changed the face of the world and how the trade in spice affected places and people from Portugal to the native India s, who suffered under the brutal rule of both Dutch and Portuguese.
Anuradha has also included a sweet love story in this rivalry for power. It is the story of Veera Kerala Verma falling in love with Unnimaya. That the two come from opposing camps makes for an even beautiful read.

Aravind’s translation is smooth but it can’t be denied that much of the flavour gets lost when changing tongues. The book contains some illustrations by artist Namboodiri. These are line sketching and don’t add much to the story telling. That said, I was fascinated by this patently but beautifully told story.

A beautiful blend of factual and fictional narrative, The Silent Witness is a vigorous but restrained historical survey.

Anuradha is the pen name of Radha Narayana Menon, an eminent writer from Kochi, Kerala. She is the author of The Saga of Black Gold and has also published two short story collections and ten novels in Malayalam.