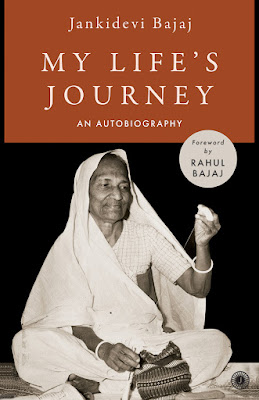 My Life’s Journey is the autobiography of Jankidevi Bajaj, who used fortitude and humility to overcome social evils that were prevalent in pre-independent India.

Born into a wealthy family in Madhya Pradesh, Jankidevi’s upbringing was steeped in tradition, with hardly any formal education. At the tender age of eight, she was married to Jamnalal Bajaj, the Bajaj heir. This book is the journey of a young girl who followed her husband’s footsteps and willingly gave up her luxurious life to adopt the quintessential Gandhian simplicity. She worked tirelessly towards India’s freedom struggle.

Her story, told in her own simplistic style, is laced with absorbing anecdotes that have the power to inspire any generation. There is plenty of wry humour as there are moving confessions about her own shortcomings. Every chapter is a quick-read but filled with the magnitude of her actions, which over time led to the abolishment of purdah and untouchability.

This is the story of a daughter of India who made the move from a mansion to an ashram, from silk to khadi, from a simple homemaker to a nationalist; a woman who went to jail for her country and marched many miles barefoot, alongside other stalwarts, to give us the freedom we enjoy today.

Jankidevi Bajaj (1893 - 1979) was one of India’s prominent social change makers. She worked relentlessly to abolish purdah and untouchability alongside Mahatma Gandhi and Vinoba Bhave. She fought for India’s freedom and endured imprisonment. She wished for a country that respected all women and was free from social evils. Her contribution was recognized with a Padma Vibhushan in 1956.